Our Favourite Parks and Reserves

Aberdare National Park covers 767 km² (296 mi²) of moorland and bamboo forest and rainforest in the Central Highlands of the Aberdare mountains. Situated to the west of Mount Kenya, the park encompasses a wide variety of terrain including mountain peaks, valleys, steep ravines, rivers and waterfalls.

The altitudes of 2,134 to 4,267 m (7,000 to 14,000 ft) result in frequent mists and high levels of rainfall. The year is divided into two wet and two dry seasons. Half the annual rainfall is precipitated during the long-rains from mid-March to June. During this period the roads can become challenging due to flash-flooding. Following the long-rains and continuing into September is the less-dry of the two dry seasons. The short-rains occur from October to mid-December during which a third of the annual rainfall arrives. Mid-December to mid-March is the driest of the dry seasons.

Being on the equator, day and night are of equal length throughout the year. The sun rises at 05:30 and sets 12 hours later. 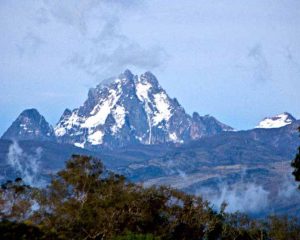 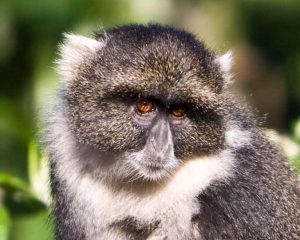 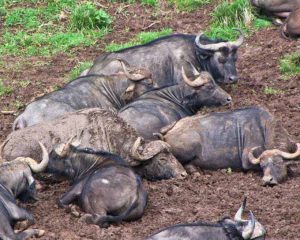 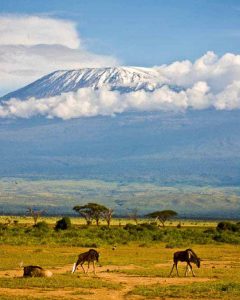 with Kilimanjaro forming the horizon 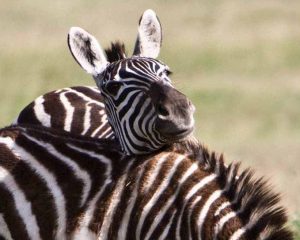 Amboseli National Park covers 392 km² (151 mi²) of flat plains, acacia woodland, rocky thorn bush, swamps and marshes. The long dry season results in a landscape of sparse vegetation and limited watering places. This ensures very good wildlife viewing as the animals have to congregate in the vicinity of the few reliable water-holes.

The typical climate in Amboseli is hot and dry. Mount Kilimanjaro creates a rain-shadow across the park. Throughout the year there is little fluctuation in the average temperature. Daily temperatures range between 27°C (81°F) and 33°C (91°F). The region has a long dry season causing drought for much of the year. Annual rainfall is approximately 300 mm (12 in) which falls in April to May and from November to December.

Although not designated as a National Park or Reserve, Lake Naivasha forms the hub of one of Kenya’s best loved wildlife spectacles

Lake Naivasha is a freshwater lake covering an area between 44 and 383 km² (17 and 148 mi²). The level of the lake varies with the season and is determined by the amount of rainfall. The lake is surrounded by an area of swamp which, during the wet season, can measure up to a maximum 64 km2 (25 mi²).

Around much of the lake are forests of the yellow-barked acacia (Acacia Xanthophlea), known as the yellow fever tree. These forests provide a haven for bird-life that makes the area a world class birding destination. 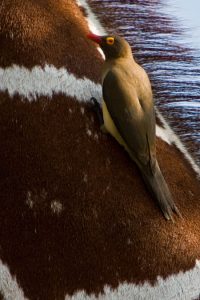 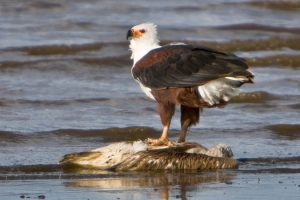 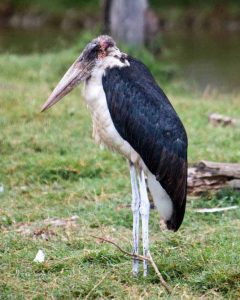 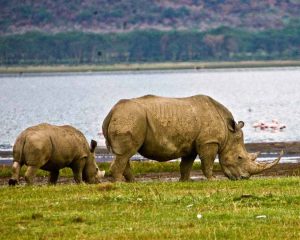 Lake Nakuru National Park is located in the Great Rift Valley and comprises 188 km² (73 mi²). Lake Nakuru is a shallow body of water varying in size from 5 to 30 km² (2 to 12 mi²) depending on rainfall. It supports large colonies of greater and lesser flamingos (Phoenicopterus roseus and P. Minor) that feed on the blue-green algae.

The climate in the lake area ranges from cool to hot and humid. The annual rainfall averages 965 mm (38 in). There are two wet-seasons which occur in March to May and October to December.

Surrounding the lake are marshes, woodland and open grassland. On the eastern side is Africa’s largest euphorbia forest.

Baboon Cliff and Lion Hill both offer stunning panoramic views across the lake and beyond. These are the perfect vantage points from which to observe and photograph the vast flocks of flamingos and wide range of other birds and animals, residents and migrants, that populate the fascinating region.

The vastness of the Maasai Mara stretches across 1,510 km² (583 mi²) within the Great Rift Valley. The landscape is generally open savannah dotted with scrub and flat-topped acacia trees. Wide horizons and even wider skies make an enduring impression as do the incredibly beautiful sun-rises and sun-sets.

The Maasai Mara is home to the largest congregation of wildlife in Kenya. The ‘big five’ (lion, leopard, elephant, rhinoceros and buffalo) can all be seen here, among many, many other species.  There are more lion prides here than anywhere else in the country. Bird-life abounds here too with more than 400 species being either resident or migratory, including weavers, songbirds, wader, kingfishers, bustards and large numbers of raptors.

At an altitude of between 1,486 to 2,150 m (4,875 and 7,052 ft) the climate is moderate and damp with maximum daytime temperatures of 30°C (85°F) dropping at night to around 15°C (60°F). The long-rains occur from March to April followed by the coolest period from June to July. The dry season from July to October, when the savannah is most lush, is when the greatest number of animals are in the area. This is when the mass migration of wildebeest and other grazing species can be witnessed. The short-rains arrive in November and continue through December. Safari trails can become very difficult following heavy rain. December to February are generally the warmest months. 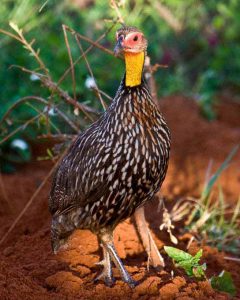 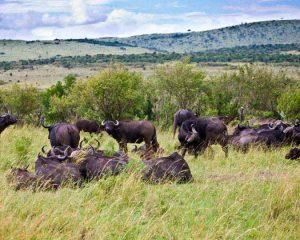 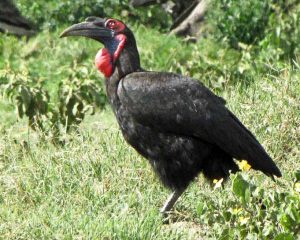 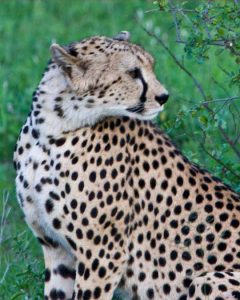 Samburu National Reserve is 165 km² (64 mi²) of rugged, sun-baked scrubland, open savannah, acacia stands and areas of semi-desert. The landscape is dissected by the Ewaso Ng’iro river which, in places, supports thick forest along its sandy banks. Although not as large as some other parks, Samburu is excellent for viewing wildlife. Animals and birds of many species are plentiful. Large herds of elephants visit the river every day and can be seen drinking, wading, swimming and playfully wallowing in the life-giving water. The river is an irresistible attraction to all the larger animals in the region despite the extensive population of Nile crocodiles (Crocodylus niloticus).

Generally the climate is dry with very hot days and cooler nights. Daytime temperatures range from 20°C (68°F) to 30°C (86°F). Annual rainfall averages 350mm (14 in). The long-rains occur from March to May and the short-rains occur in November and December. During other times Samburu is hot and dry.

This is the larger of the two Tsavos. Combined they are bigger than Wales making them one of the worlds largest wildlife sanctuaries and the largest in Kenya.

It was once the home of the notorious man-eaters of Tsavo, a pair of male lions which, in 1898, over a 9 month period, killed and ate 35 Indian construction workers building the Uganda-Kenya railroad. The killings came to an end when the pair were shot dead by the project leader Lt Col John Henry Patterson.

Tsavo East National Park is massive, covering 11,747 km² (4,430 mi²) of arid savannah and scrubland and marshland 280 km (174 mi) south from Nairobi.  The terrain of Tsavo East is generally flat and includes the unique feature of the large, impressive Yatta Plateau formed by lava that erupted from Ol Doinyo Sabuk Mountain.

Due to the dryness of the region, much of the wildlife came be found close to the Athi, Galanaand and Voi rivers and also the swamps. The inhabitants of this wonderful place include the rare lesser and greater kudu (Tragelaphus imbelis and T.strepsiceros) and the even rarer klipspinger (Oreotragus oreotragus). There are large herds of elephants here and they dust bathe in the park’s distinctive red dust which, in the early morning and evening light, really does make them appear startlingly red.

In 1952 the Aruba Dam was built to create an 85 hectare reservoir to conserve the scarce water resource. The dam has been a life-saver for many species but the region is so dry that the water level can still drop dramatically at times. 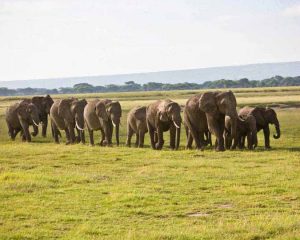 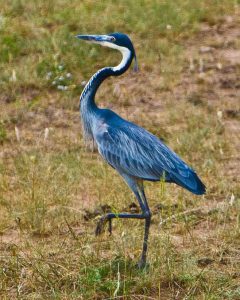 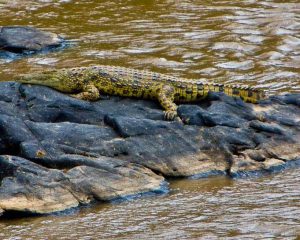 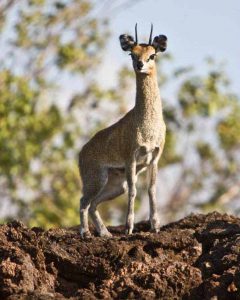 Tsavo West National Park is 9,065 km² (3,500 mi²) and is located 240 km (149 mi) south of Nairobi. The landscape of Tsavo West is more varied than Tsavo East, and comprises savannah, woodland and scenic mountainous terrain including the Shetani lava flows and the volcanic Chaimu Crater. Higher elevations in the park give views of snow-capped Mount Kilimanjaro across the border in Tanzania. The difference in topography results in higher rainfall of 200 to 700mm (7.9 to 27.6 in) annually and wider temperature ranges of 20 to 30°C (68 to 86°F) than Tsavo East.

The word “Tsavo” means ‘place of slaughter’ being named in remembrance of an ancient battle between the Maasai and Akamba tribes.

The rare fringed-eared oryx (Oryx gazella cullotis) can be found here. You may aslo be lucky enough to view kudu (Tragelaphus imbelis) or a serval cat (Leptailurus serval).

Lake Jipe is a magnet for wildlife including elephants, rhinoceros, crocodile and hippopotamus. The area offers exceptional bird watching opportunities with an excess of 500 species having been recorded here. In 1977 a small number of the endangered Grévy’s zebra (Equus grevyi) were introduced from parks in northern Kenya and their descendants can been seen in the Lake area.