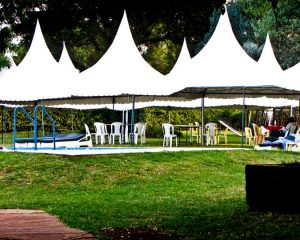 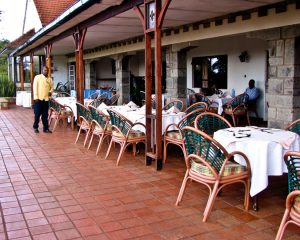 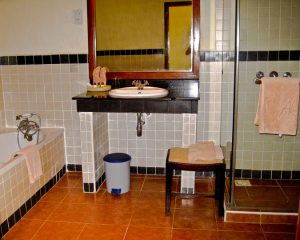 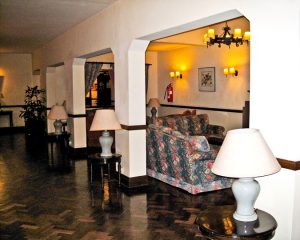 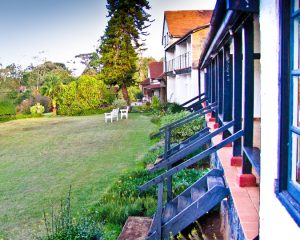 Outspan is an historic hotel and a fine example of an aristocratic building in the colonial style with a timeless, tranquil, charm nestling in a peaceful garden setting on the banks of the Chania River. Located in the town of Nyeri about 150 km (93 mi) north of Nairobi, it is the perfect stop-over en-route to the Aberdare Mountains.

Outspan was built in 1926 and then, two years later, purchased by Major Eric George Sherbrooke Walker MC (1887-1976), an Englishman with a somewhat colourful history.

He fought in the Crimea where he was awarded the military cross for his gallantry at Ushun. He saw active service in WWI in the Royal Flying Corps and in WWII in the RAF as well as the western desert during the North African Campaign. His military career continued into the 1950’s when he served during the Mau Mau uprising. Between the world wars he ran a very profitable illicit bootlegging business, smuggling whiskey into the USA during the prohibition era.

In 1932, the Major founded Treetops safari lodge which became world-famous when visited by the then Princess Elizabeth for an overnight stay on 5th February 1952. During the early hours of the following day, her father, King George VI, died at Sandringham House, Norfolk and consequently the Princess succeeded to the throne of England as Queen Elizabeth II.

Outspan Hotel is well-known within Scouting and Guiding circles as being the final home of Robert Stephenson Smyth Baden-Powell OM, GCMG, GCVO, KCB (1857-1941). Baden-Powell had a distinguished military career, seeing action in the Anglo-Ashanti wars, Matabele war, Boer War and the siege of Mafeking. In 1907, he founded the Scouting Movement for boys and, in 1910, the Girl Guide Movement began.

Baden-Powell had once employed Major Sherbrooke Walker as his private secretary. This acquaintance led, in 1939, to Baden-Powell moving himself and his family to a small house in the grounds of Outspan. They also became frequent visitors to Treetops. After his death on 8th January 1941, Baden-Powell was buried in St. Peter’s Cemetery in Nyeri where there is now an information centre for Scouts, Guides and all those with an interest in Scouting activities.

Outspan has 3 cottages and 14 deluxe and 28 standard rooms. Most of the rooms have a fireplace and direct access to the mature gardens. The restaurant retains many of its original colonial features and the ambience echoes old-world charm. Meals can also be enjoyed semi-alfresco on the veranda which opens onto the gardens from where, on clear days, it is possible to see the snow-capped peak of Mount Kenya, Africa’s second highest mountain.

The hotel has tennis and squash courts and an excellent swimming pool. Guided river walks are also available daily.

The region is the ancestral home of the Kikuyu people and in the grounds of Outspan there is a reconstruction of a Kikuyu village. Members of the Kikuyu tribe hold regular displays of ethnic music, songs and dances here. They will describe their traditional beliefs and traditions, giving you a unique insight into the lives of the original inhabitants of this particular territory of ancient Africa. 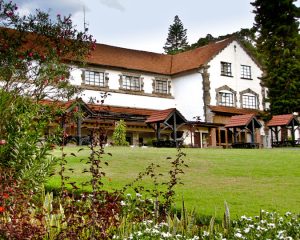 the hotel from the gardens 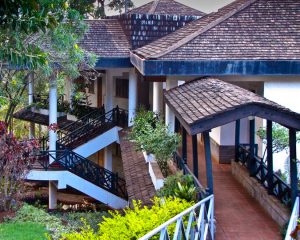 view along the walkway 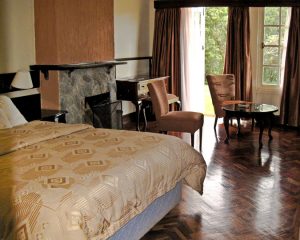 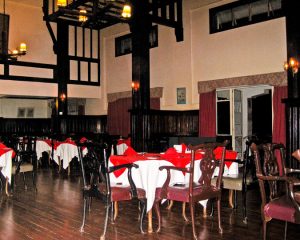 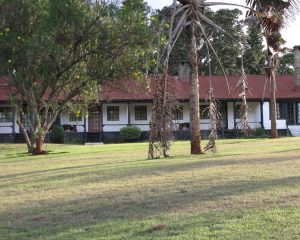